Jeff Roux, owner of and lead trainer at Excel Fitness first met Karen in 2009. Despite sensing her skepticism regarding training, Jeff was able to convince Karen to attend an initial and complementary consultation session. Jeff spent considerable time researching Karen’s self-described physical ailments, goals, and other health concerns after their initial meeting. He then felt confident that he could effectively adapt a work out to suit Karen’s needs. Jeff explains that, “a second workout was required to thoroughly convince her [Karen] of our abilities at Excel Fitness; she and her husband Dave joined the gym shortly thereafter.  What I didn’t realize at the time, is that Karen is whole heartedly dedicated to her health and improved fitness! I am continually impressed with her work ethic and ability to implement many of the things she has learned throughout training into her own workouts.” Jeff adds, “Karen is a true role model to anyone starting a fitness program, particularly those who have had injuries and setbacks with prior fitness routines.”

Karen states, “I walked into Excel five years ago, having decided I might benefit from working with a trainer and in search of a new gym – The Fitness Clinic had closed. I spoke with Jeff and set up an appointment for a trial training session. I was somewhat skeptical, having a number of “parts” issues and went into the first workout with caution.”

Jeff met and exceeded my expectations for the next two years, where I found myself gaining strength in areas of weakness. A breast cancer survivor for almost 20 years, I have some limitations because of the surgery and reconstruction I underwent. I was extremely pleased with my progress and lost some weight as well. My next challenge was still ahead.

During the freakish snowstorm in October, 2011, I tripped going down the basement steps during the power failure. I had extensive injuries to my left shoulder, had a failed surgical repair, ultimately going to Boston for a reverse shoulder replacement. After five months of shoulder/arm immobilization, and six months of PT, I was able to resume working out at the gym. Jeff was and continues to be a huge part of my rehab, adapting workouts to accommodate my various “parts,” including the permanent restrictions with my shoulder, and enhance its strengthening. He pushes me in ways I would not push myself, and consistently introduces new approaches for strengthening and endurance. I give Jeff credit for the level of strength and function I have attained with ever changing workouts and encouragement. Kudos to Jeff and Excel Fitness for being such an integral part of my recovery! 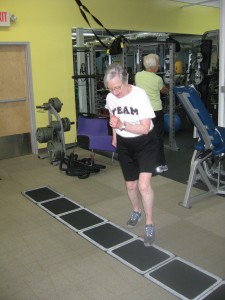 Happy New Year!
Friday hours 7a-2p
Saturday Fob access only
We wish you increased physical and mental health in the years to come!

Happy New Year! Friday hours 7a-2p Sat Fob access only We wish you much success in physical and mental health in the years to come!